Warning: "continue" targeting switch is equivalent to "break". Did you mean to use "continue 2"? in /homepages/39/d708990151/htdocs/wp-content/plugins/qtranslate-x/qtranslate_frontend.php on line 497

Warning: Parameter 2 to qtranxf_postsFilter() expected to be a reference, value given in /homepages/39/d708990151/htdocs/wp-includes/class-wp-hook.php on line 286
 UXPin. Nice and interactive Wireframes. - Ipak 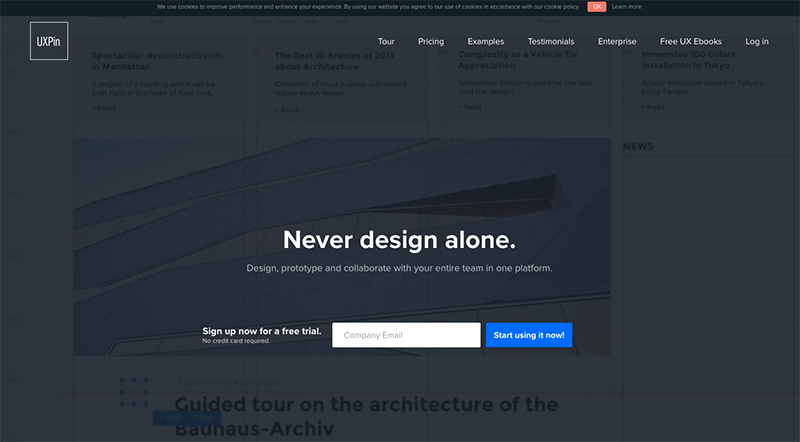 In the last two years, I have had the opportunity to test various tools for prototyping web and user interfaces, obtaining different results with each (Prototypr, Invision, Balsamiq …) and in my opinion, UXPIN is perhaps the most complete that I have I tried so today, I would say that is the most versatile of its kind, at least that I’ve tried so far.

After reading and analyzing all the tools recommended in the article published in www.tech.co “15 web design tools to try in 2016,” UXPIN has been a pleasant discovery … A tool that I think every designer or web UI should at less known, but I will also challenge them probeis.

It is a (fairly fluid to be online) prototyping, both web and mobile, which allows you to create highly visual wireframes and what is more interesting, interactive and dynamic online tool.

It is very complete in terms of tools, since it allows number of shares that make work easier (alignments, groups, layers …) includes a very extensive library of graphics resources ranging from forms, through emoticons, to native components iOS, Android, loaders animated and etc. The appearance is a very visual interface and quite intuitive style graphics editors such as Photoshop or Illustrator, ie a bar to the left that contains the library and some other functionality, a top bar with a small menu share, preview, etc … a toolbar to the right where the main options and (obviously) limited by rules in pixels main workspace where the interface is edited simply by dragging objects from the library to the worktable are configured and redistributing them to your liking. Of course it allows you to include your own images, which can contribute to your “sketch” a fairly presentable finish.

As mentioned earlier, one of the most interesting things including this tool is the ability to not only create interactions between objects and different pages, which will allow for example to create a fully functional menu, but also allows animations quite interesting, as transitions , motion tweens, rotations … All can also control how the interaction is created, ie, by a click, a gesture to swipe a “hold” … the creation and editing of these interactions is very simple, through deployable attending each step giving you the options you can select and where to direct the flow of navigation and of course, creates a responsive version of the project, a must today.

Finally, and already facing the export mockup, remains very complete … On the one hand allows export as PDF, PNG and HTML (in the latter case the recipient would have to run the index, simple thing in principle) and the other side could share it by sending a URL or a QR code which will allow the recipient to display the project directly in the browser is comfortably on the device whatsoever.

Pricewise … are $ 26 per month, a priori can be a bit expensive, but much depends on the volume of “proposals” that soles do, so if I say that not much different from other similar tools, so if you go end up using another, by the difference of a few dollars I decantaría for this.

In short it is a tool that I recommend trying it is useful both to show sketches clients, as for working environments as it allows users to add comments to my course is a “must have” this 2016.

This website uses own and third party cookies to provide better service and browsing experience. If you go on surfing, we will consider you accepting its use.